Our first attempt at walkies out in the world

Posted on July 1, 2009 by horsegirlonajourney

I took Rock off the property today in his new boots. We hit a threshold almost immediately — goats — and I used yo-yo to approach and retreat. I tried so hard to read him: do you need to move your feet? OK, squeeze game. Do you need to think first? Ok, yo-yo and stay back. 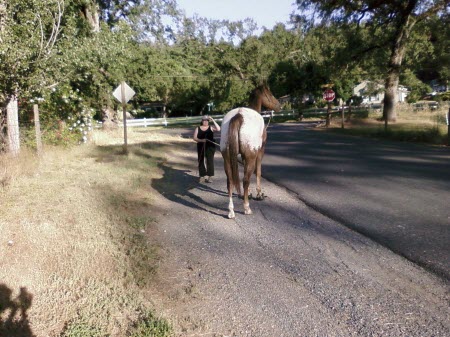 But I feel so incompetent. I don’t know if I pushed him over any edges. I tried not to! I don’t know if we came in too soon. I think not, because Linda says you can always stop, just make sure the last thing you do is a comfortable and familiar thing, to end on a good note. (We did that.)

He could not stand still on the squeeze so he had to do several 180s with only a 1 second halt. He had his head up and nostrils huge almost the whole time he could stand still. He did drop his nose a few times and he even got some bites of dried grass, but then he’d fling it up again and have another cycle of spook and adrenalin.

With lots (lots) of backing and waiting and squeezing, we made it to the first mailbox on the route. I had cookies and put one on there and said Touch, and he did. He had a hard time finding the cookie and seemed to be torn between staring and spooking about the goats and nuzzling the mailbox until he got the cookie.

He has been walking beside me rather than behind me lately and I have been working on that. I am having to back him many times even just between the pasture and the barn. Does that mean my phase 4 is not strong enough? What if I try a new tactic: instead of turning and yo-yoing him back, what if I say Ok, go ahead! and turn it into a Falling Leaf, back and forth in front of me? Or even Traveling Circles? I usually feel too claustrophobic on the 12-foot line for those “big” patterns but too clumsy and tangly to trust myself with a 22-foot line in a new environment, especially with the road right there. I bet the 12 feet are enough, though, if he can squeeze with it, and it’ll be 14 feet if I extend my arm.

Today was the first time in a long time that I felt my own negative emotions rising — a little bit of fear, a little bit of frustration with myself for having studied so much but not knowing what to do in situ. I was in the Not So Sure zone of Stephanie Burns’ “Move Closer/Stay Longer.”

Here’s what Natural Horse Lover wrote about it last year:

The idea of the [comfort zone] model is to explore where you and your horse are and stretching the comfort zone by taking your horse and yourself into the Not So Sure Zone and returning back to the Comfort Zone, while avoiding the Unknown/Danger Zone.

This can be applied to any game we play, on the ground and while riding. The base line of the zones will be different for every horse and human and will change with progression in the Parelli Program.

It seems like it “should be” such a simple thing: take the horse for a walk.

This is simple, but it’s not easy. ~ Pat Parelli, Warren Buffet, & Lots of Other Wise People

I have to have faith that by taking the time it takes and not just jamming him along, both of us will grow in confidence, and then skills. At the moment I feel conflicted and incompetent and resigned and back at the beginning.

In a way, it is back at the beginning, because I have to go back to “walk behind me not beside me” and playing the games on the 12-foot line with the carrot stick and string dragging but not being stepped on. I have to build up my leadership and become more interesting than spooking.

After an experiment at Liberty in the round pen that resulted in the six geldings in the turnout (which shares a fence with the round pen) galloping, farting, and bucking all over the place, and Rocky doing the same in the suddenly little tiny circle with me in the middle, I took him to the Comfort Zone: the covered arena.

There I let him loose to roll and gallop and buck and kick, which he did with more energy than I’ve seen in a long time. So much that he ended up with one of his boots dangling from the pastern strap.

I stood in neutral in the middle and pretended I didn’t notice him snaking his head, holding it to the outside, or otherwise trying to dominate me. When he stopped and looked at me, I waited until he picked up a front hoof (30 seconds? a minute?) and then walked backwards in friendly pose, and he drew into me really cute and perked. I scratched him a bit and put him away in time for his dinner; we hung out at the trough for a bit so he could play with curling the water on his tongue and then sucking it.