BFO: Sideways without a ‘block’ and a nifty success

Posted on July 27, 2009 by horsegirlonajourney

Rocky does a beautiful Sideways Game down the rail or along barrels or any other horizontal visual aid, but we’ve never quite gotten it with just our bodies.

Today, watching Rocky meander across the arena to play with the water in the trough, I had a Blinding Flash of the Obvious (BFO): I am doing the same thing over and over but hoping for different results. Whoopsiedoodle.

I have taken all the fun out of sideways-without-an-aid by using a sharp vertical thwap of the rope when he goes forward instead of sideways. And then I haven’t released at the slightest try — even if it’s only an ear flicking sideways — so how can I expect him to know what I’m asking and build on it? He “knows” sideways … but that doesn’t mean he knows sideways without an obstacle.

I feel like I got to Algebra II and then forgot how to multiply by four: I need to go back to basics in order to improve my higher level stuff.

If he goes forward, I have to let him go a few steps, and then, without moving my feet, lightly stop him and back him up to our original position. That’s the key: I have to be still and light in order for Rocky not to feel frustrated (“I can’t succeed!”), confused (“what the hell are you asking me?”), and shut off (“I don’t see the point”).

As for the nifty success, I remembered today to acknowledge Rocky for being so good with the trimmer and with his feet being handled in general. He’s actually too relaxed with the trimmer and is liable to lean on him if we don’t encourage him not to, but that’s better than refusing to pick up his hooves or kicking or biting. 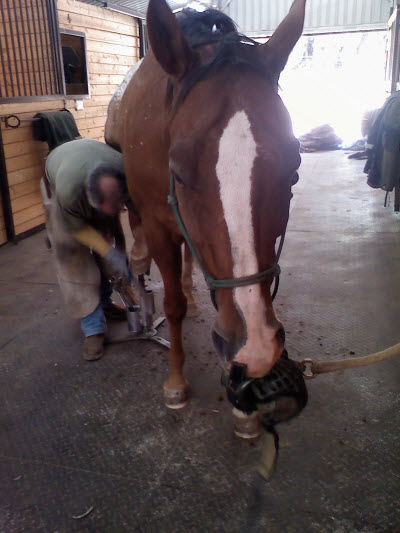 Holding a boot while getting a trim

For cleaning, I barely have to touch the chestnut and Rocky lifts his foot. The only time he has ever resisted is when his right front foot was sore and had some thrush deep in the frog cleft, he did not want to pick up his left front foot. But he did it anyway. (I cleaned it as fast as I could so he didn’t have to put his weight on his right for too long.)

Knowing that horses reflect and mirror their humans, I know that I can take some credit for this hoofy relationship. I have not created a footshy problem or “yelled” at him with a sharp pinch or tug or caused him to hate having his feet cleaned.

High time to wash those socks …

One thought on “BFO: Sideways without a ‘block’ and a nifty success”