Putting the relationship first, because it’s not about the …

Posted on February 26, 2013 by horsegirlonajourney

One of the Parellisms that I understand more deeply as I progress is “It’s not about the ____. It’s about the relationship.” 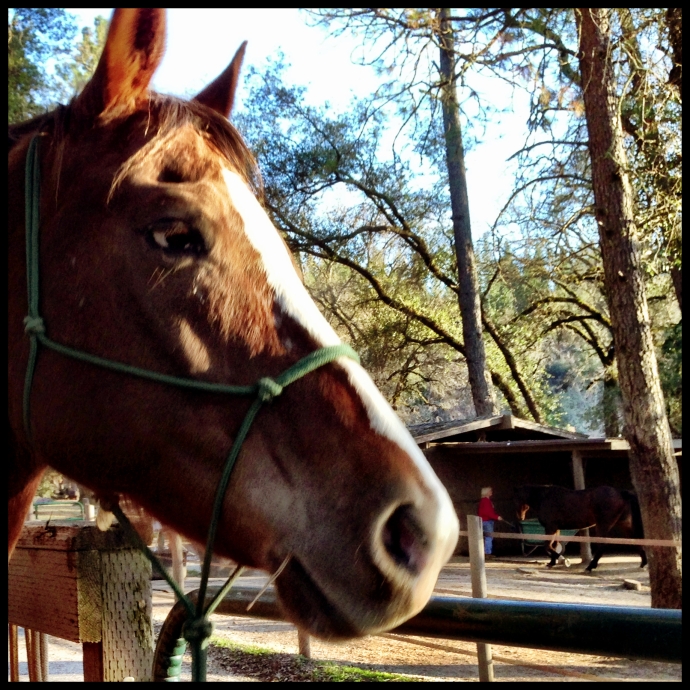 Last week’s riding sessions went well. Lots of learning and trying, for both Rocky and me. But the weekend rides included Incidents that could have turned into danger if I had allowed them to escalate. The weekend rides featured brace at all three levels, mental and emotional and physical. This does not mean they didn’t “go well.” It means they are new challenges on the journey.

I am confident and skilled enough to stay on through small arguments that would have scared me stiff a few years ago. And I am savvy enough to hop off at the first thought of “Hrm, maybe I should bail while I can still do so on purpose, and handle this from the ground.”

But the real question is, why are we arguing? 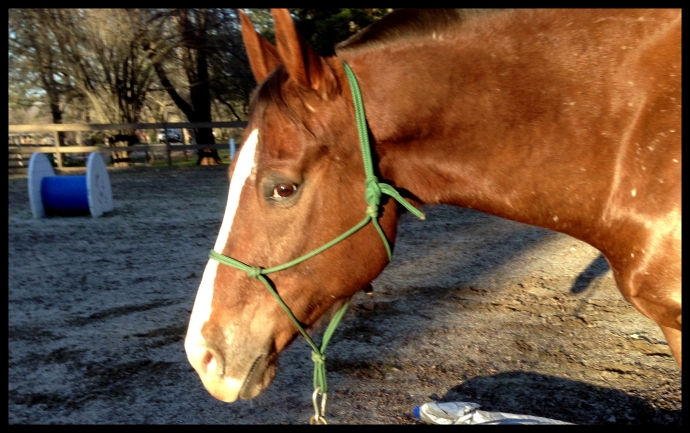 I know it is the relationship. I can feel that something is wrong. I just don’t know what it is.

He still whickers when he sees me and trots to his gate to meet me. He thrusts his nose into his halter. He puts effort into the new things we are playing with.

He was acting like a partner, not a prey animal or a teenage boy, last week during our freestyle riding practice. He has been moving beautifully, floating over the poles, choosing to go over the poles at liberty, cantering with relaxation, looking more fit and sound. His back has not been sore until Tuesday, which makes sense, given Monday. 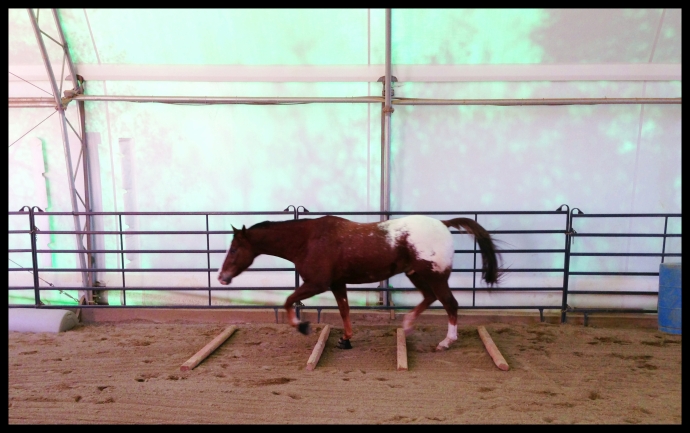 Yet the backing up evasion has escalated to the mini threat-rear which could escalate to real rearing. This is Not Okay. And I don’t know what is causing this behavior. What is he trying to tell me? Other than NO?

If your horse says no, you either asked the wrong question, or asked the question wrong. – Pat Parelli

I have done everything I know how to do, from adding more complexity to the arena patterns to keep them fun, to backing off and doing simpler things to keep them unscary, to going outside the arena when he so obviously wants to, even though once we are outside he seems to be looking for things to get up about. I have included undemanding time in the barn with a hay net, a random carrot in his pen as I walk by, hanging out and grazing on the lawn.

I have run out of savvy arrows and have scheduled a lesson with Erin for Thursday so I can get more in my quiver.

Incidents recorded in detail after the jump. Ready? Jump!

Saturday
Saturday’s incident happened while riding Rocky around the ranch loop behind Janet on her horse Parker. Parker is usually calm, a left-brain introvert who tolerates the arena but likes the trail. I thought it would be good to follow him and play trail ride. It turned out that Rocky was more forward, yes, a good thing — but also more up, wanting to catch up or even pass Parker, which I did not allow. 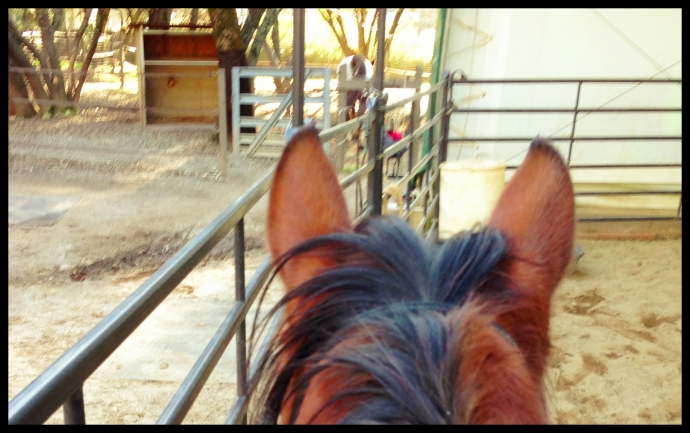 When we came around to the arena, the donkeys were galloping around inside, having discovered that we had left the gate open. Rocky decided this was an invitation to run to the arena instead of follow Parker alongside the arena on the trail. I used the “and then some” savvy arrow (as in, “oh good you want to turn left, let’s do that and then some”), and got his attention back through hindquarter yields. We rested a while with Parker and Janet before resuming our trail ride.

But then when we walked by the arena, he began to prance and again I asked for hindquarter yield, and this time he tried his backing up evasion. I applied driving game in zone four — that is, I tapped him on the haunch with my rope — and he reared up just a little tiny bit when his hind feet were on the edge of the berm in front of the arena.

I instinctively curled and moved my weight forward and when the front feet were on the ground again, I jumped off the uphill side and immediately backed him up all the way to the barn. I sent him around me into the arena, where I proceeded to back him all the way to the back fence, then sideways along the fence, and then trotting circle game over poles with a pattern of cantering a quarter circle after the poles on each circuit. With some changes of direction. All of this movement and complexity focused him and engaged him and when we did finally stop to rest, he licked and chewed for minutes and minutes. And I rode him around at a walk for a short time before unsaddling,

Sunday
Sunday’s incident was less dramatic, but similar. He did not want to go forward in the arena, so we came out and practiced our follow the rail on the outside.

But he braced and walked over to the barn where I sometimes dismount, and I had to get to the beginning of phase 4 (tap his hiney with the rope) to get him to head back to the arena, where he refused to go through the gate. I ended up riding past it, dismounting to shoo the donkeys away from it, mounting again at the fence, and trying again. He still would not go through, and started his backing up trick. It is scary to bend him on that slope, so I turned him away from the gate and asked for forward away from the gate, which he did willingly — in the opposite direction from the barn, too.

And then a hindquarter yield until his butt was toward the gate, and we backed through. Not without some hesitation but it was confusion about what I was asking, not a brace (one-rein backing is new to me and I wasn’t sure how to do it, but I kept saying “back, back” and he knows that and put some effort into the try). I stopped him partway through for rest and praise, and then again when his head was all the way inside the arena.

After that, I took him out to graze and just sat with him, undemanding. Pondering the relationship and what I can do to fix it. What is broken? His trust? My leadership?

Monday
Monday, I didn’t ride. I thought a walk together around the ranch trail would be nice and positive. Yet he kept surging forward, wanting to go, not walk behind me or even next to me with zone 1. There was a lesson going on in the main arena so I took him to the front arena and got my 45-foot line so be would really have room to move but still be connected to me.
It started out well, with fast, big, but normal trot, not all high like he often gets when he is up there. (“It’s not about the front arena…”)

And then just when I was about to bring him in for the nice trot and go somewhere else, the head went up, the eyes went wide, the rollers in his nose went to eleven, and it was 45 minutes of arcs and circles before he was able to soften again and focus on me. And the licking and chewing went on for minutes, again.

Tuesday
I intended to ride around for 10 minutes at the walk, just to have a positive riding session before our lesson on Thursday, but he was so draggy walking and trotting during our warm up on the ground that I thought he might be sore from yesterday’s spazzing and then so many changes of direction. When I ran my hands down his spine, he reacted near the withers and again near the croup, so we walked around and did carrot stretches and hung out together for a while. He was at liberty with the whole arena to be in and chose to stay next to me, so that is a good sign. 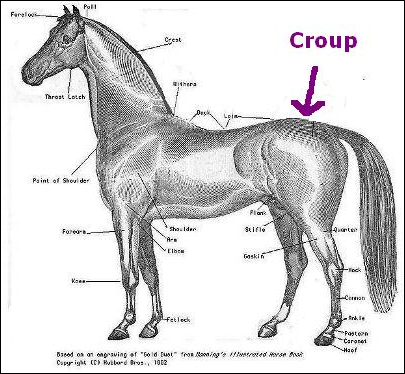 One thought on “Putting the relationship first, because it’s not about the …”