In which Horsegirl finds the Holy Grail

Posted on July 10, 2013 by horsegirlonajourney 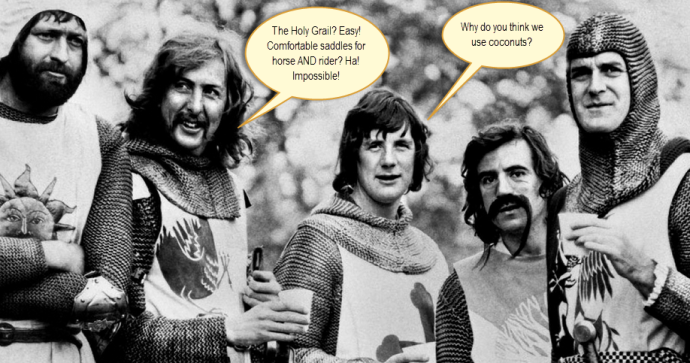 Saddles That Fit was on the ranch today to fit a saddle for another Equine Partners, Inc. student, who has a Tennessee Walker mare named Sunni, or possibly Sunnie, or even Suni. When I heard they were coming, I scheduled a saddle evaluation for River. My friend Barbara is selling her Specialized trail saddle and while we knew that it didn’t fit Rockstar, we thought it might work for River. It was more than a whim, but less than a plan.

I played with her on the ground for about 90 minutes before it was our turn to be evaluated. We spent time grazing, played Touch-It, went over and around and through obstacles in the arena, and stood peacefully together watching the other mare’s fitting experience. When Susan came over to put the saddle on, River probably thought that it was time to go back to her pen. Instead, her adventure was just beginning.

Another 90 minutes of riding, shimming, riding, adjusting the shims, turning the saddle upside down to move the fenders behind the screw of the seat plates (huh?), and riding and adjusting and more riding, we had a saddle fit that River can wear from day to evening and back again. 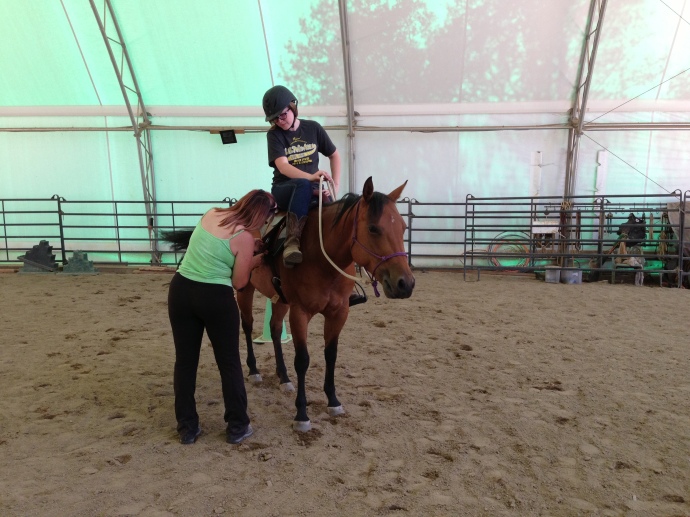 River stood calmly every time Susan and David adjusted the saddle, shims, or cinch. Maddy and Erin both evaluated the various configurations at walk, trot, and canter. I rode at walk and trot with Erin at the helm so I could just concentrate on feel. River was patient and held up well for what might be the longest riding session she’s ever done. Even when she got obsessed with Sunni’s hay bag and became bracey, she continued to do her job for Maddy and Erin.

The one time I rode on my own, I tried to ride across the arena to Erin, where she was talking with the other student. Unfortunately to ride “straight” to Erin I would have had to walk right through Sunni. When I asked River to make an arc around Sunni’s spot, River target-locked on Sunni and the hay bag, and I wasn’t quick enough at figuring out how to guide us onto a safer path. Maddy came over and took the rein to help me move River further from Sunni’s bubble.

Lesson learned: I should have gone to the water tub first, opposite of Sunni. River and I had successfully gone there on-line several times earlier in the morning, and I would have had fewer distractions for my own focus. I hadn’t intended to show off, but I had intended to challenge myself. That I wasn’t up to the challenge — couldn’t think of a strategy fast enough, then was ineffective at implementing the strategy I did pick (leg AND rein AND energy AND body AND phases!) — just means I have something specific to work on next time.

How long has it been since I was last self-conscious and embarrassed about things like this? I’m not even sure. I know that at one point, I would have felt humiliated, showing six people that I wasn’t able to exert enough leadership to keep my horse from veering into a confrontation. Today I just laughed and made wry humorous comments and thanked Maddy for the rescue. I am where I am and where I am is good enough. Wherever it is. Whenever it is there. When I (finally) took the saddle off for the last time today, Sunni had gone home with her owners. I took River to the hay bag and she munched contentedly while I rubbed her back. I then went inside for water and a snack and gave River an hour of alone time with the hay.

Given that Rockstar’s saddle is under construction and expected to arrive the first week of August or so, we are not very far away from two of us being able to ride, comfortably, in saddles, at the same time. At which point if anyone tries to sell us a holy grail, we can say in our best Monty Python French accents, “We’ve already got one! It’s verra naihce!”