A mutual promise of rhythm, relaxation, and respect

Posted on November 28, 2013 by horsegirlonajourney

Pat’s “problem horse makeover” segment of last month’s Savvy Club – Inside Access video shows Pat helping a woman who is just starting out with Parelli and a horse who “won’t let anyone touch his ears.” Here’s an excerpt:

Naturally, it’s not about the ears. It’s about the … say it with me … relationship. Pat explains that horses tend to get ear-shy because people take off the bridle too fast, allowing the bit to drop suddenly and clonk into the teeth. Ouch! The horse first starts bracing and then escalates to tossing his head and lifting it high and barging into the person’s space to dominate or trying to flee or otherwise resisting, because he knows that if he lets the person reach for his ears, he’s going to get punched in the mouth.

Pat sits down to work with the horse, to show us that we don’t have to be as tall, strong, or athletic as Pat to be effective. He uses a combination of Porcupine Game™ and Friendly Game™ to help the horse learn a new pattern of cooperative participation: relax, lower your head, and bridle or unbridle yourself.

This is how you teach a horse to follow a feel and move away from pressure applied with your fingertips or the Carrot Stick. This game prepares him to understand how to respond to communicative feel (or pressure) from the rein, the bit, the leg, etc.

This pressure is applied with a steady feel (not intermittent poking) and steadily increasing intensity until the horse responds, at which time the pressure is instantly released. It is applied in Four Phases, each phase getting progressively stronger. Releasing only when the horse responds. In this way, it’s the release that teaches the horse he made the right move. Reward the slightest try with instant release, rubbing (as in the Friendly Game), and a smile. ~ The Seven Games, Parelli.com

Pat also shows the horse that humans can be more cooperative and relaxed, and without directly saying so on camera, expects that the owner will henceforth ensure that anyone who handles this horse (and hopefully any others she is responsible for) does so with the attitude and techniques that Pat demonstrated.

Rockstar was head-shy when I got him and would fling his head up and become 27 feet tall if I reached toward his poll. If I stood on a mounting block to reach, he would pin the ears and lean away from me. If that didn’t work, swing into me. Luckily for us both, I found Parelli soon after buying him, and I had a good horsewoman friend and instructor in Jenni (of Ravendaisy Farms in the Los Angeles area, shameless plug!).

As I watched the video of how Pat moved his hands and body and how the owner moved her hands and body, I understood why I’ve been able to get Rocky so much better about us touching his ears, but only to about 75 percent about 75 percent of the time. I’ve learned to be slower and more deliberate in my movements when I’m paying attention, but so often I’m still operating my body on auto-pilot while my half my mind is in the present moment and the other half is working on a dozen other things.

So yesterday I sat on the mounting block with Rocky in his halter and lead, brought my full attention into my body, and allowed the moment to permeate my skin. Then I played the combination of Porcupine Game™ and Friendly Game™ with “passive persistence in the proper position” until both Rocky and I won. 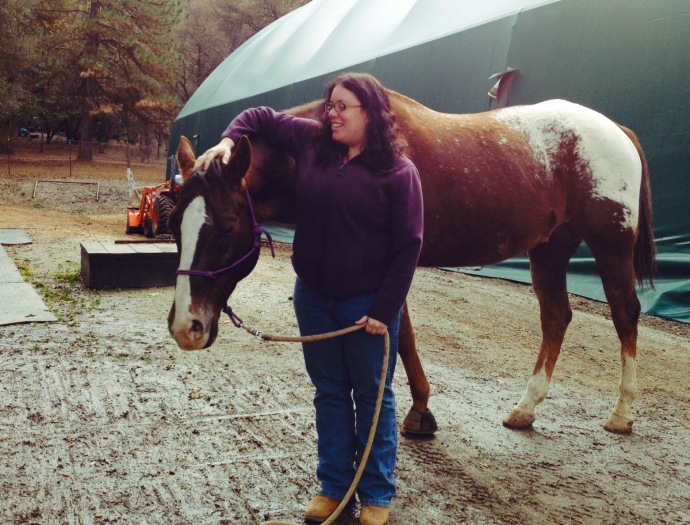 I won, because Rocky relaxed and put his head down and blew out and licked and chewed and didn’t brace when I moved my hand toward his ears or when I asked him to lower his head an hour later. He even nudged me (gently) and leaned into the massage and sighed. To quote Linda Parelli, “that’s HUuuuuGE!”

Rocky won because he found relaxation and comfort in a position that has caused him anxiety for most of his life, and possibly pain for the first several years.

My goal for December is to improve my ability to uphold Responsibility #4: Use the natural power of focus. Three behavior changes that will help me meet this goal:

I’m heading outside now for our last Freestyle practice session before filming our dress rehearsal audition on Saturday. The one area I’m still struggling with is riding with one carrot stick — so maybe I’ll just have to do it with two!

2 thoughts on “A mutual promise of rhythm, relaxation, and respect”