Rocky caused his ideas to become my ideas

Posted on August 14, 2014 by horsegirlonajourney

Yesterday, I hitched up the trailer all by myself for the first time! I devised a system to help me position the ball under the tongue. The green masking tape on the trailer marks the tongue position and the green tape on the inside of my tailgate marks the ball. (I later took off the horizontal piece, as I no longer needed it.) When I look in my rear-view mirror when I’m hitched up, the vertical tape pieces align perfectly. When I look over my right shoulder to back up, the tailgate vertical piece is just slightly to the right (my right) of the trailer piece. And the length of the trailer piece tells me how close I am — when the bottom of the tape disappears from my vision, I’m close enough.

Barbara, the trailer’s owner, invented an initialism to use as her hitch-up mnemonic device and taught it to me. It’s pronounced “week” but it looks like this: 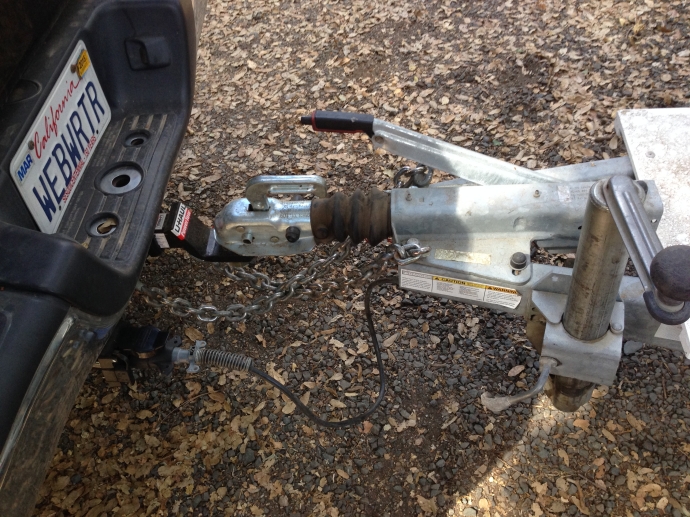 And then I put the ramp down and got Rocky. My plan was to allow him to sniff around the trailer, maybe put his feet on the ramp, nibble some hay off the floor.

His plan, apparently, was to spend two minutes inspecting the accommodations and then load up for a snack. 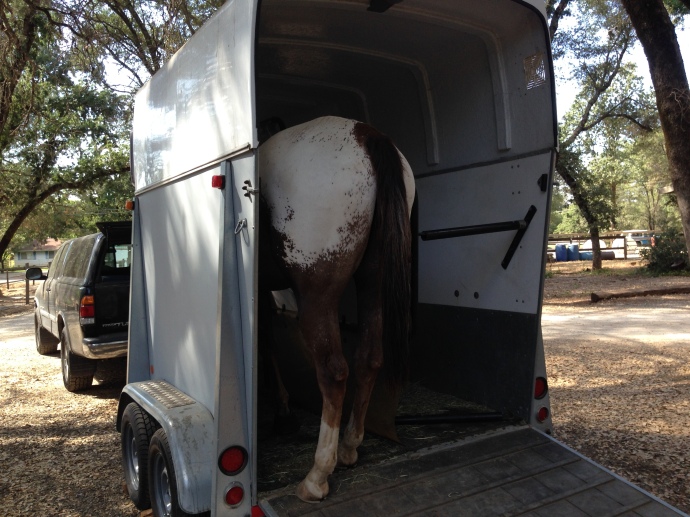 He has another 18 inches of room in front of him but the way the hay hammock was placed, if he’d gone all the way in, he would have had to bend his nose to his chest to eat. Today, I’ll replace the hammock with one of our hay nets and hang it a little further forward so he can fit his whole body in. And then we’ll put up the tailgate ramp and if he’s fine with that, I might even take him down the driveway. (If he’s not, we’ll practice with the trailer closed a few more times first. So so grateful to Barbara for allowing me to borrow the trailer for 38 days in a row!)