Actually, this kind of is my first rodeo

Posted on August 19, 2014 by horsegirlonajourney

He did not panic at the new environment or at being the only horse. He did have a double-take when he saw Erin’s umbrella (for shade), so we walked behind her for a while. In a way, it was a nice focus for us, instead of looking around us for other things to shy about.

He followed me across the field and through the squeeze of the little antechamber before the arena gate. Once in the arena, I switched from the 12-foot line to the 45-foot line and set out to play. My goal was to give Rocky some tasks to focus on if he started to get on adrenaline, and to reinforce my leadership on-line before giving him some liberty time. It was the first time we have been able to use the 45-foot line at its full length!

I used the yo-yo game to help Rocky focus on me, doing more yo-yo than sends, as he has of late a) been crooked in his yo-yo and b) anticipated that all yo-yos meant go back and circle. I stayed conscious and tried to make it more like a dance and less like flailing around inside a rope, and Rocky began to tune in and ask questions. We did some trot circles and I encouraged him to drift toward the edge of the rope rather than fall into our habitual 18- to 22-feet loops.

When we had completed a few laps with connection and relaxation, I brought him in and took off the halter.

When you take off the halter, you’re left with one thing: the truth.

The first thing he did, loose in that enormous arena, with flapping banners and a clanging flag pole and all kinds of distractions and new things, is … drop to the ground and roll. Then he got up and walked around to sniff things. 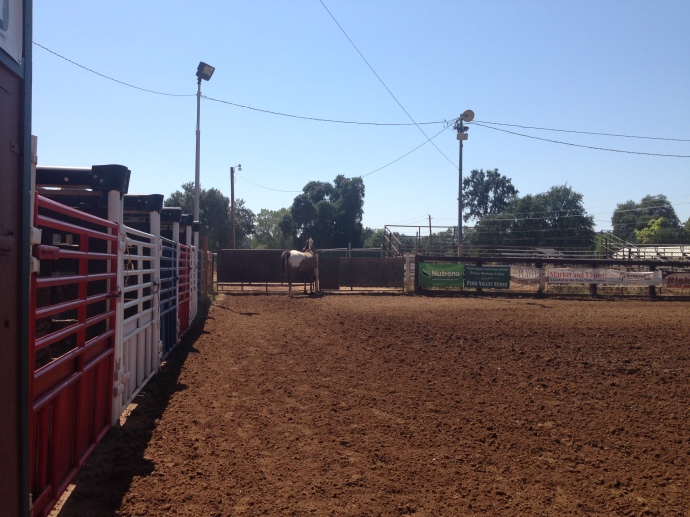 He visited Jan and Seth in the little patch of shade where they were watching. And then he came back to me (with a brief stop to sniff and touch Erin’s umbrella).

We played stick-to-me at the walk, halt, and trot. I picked a destination like a barrel or a banner or interesting manure and then we just went there, together. I didn’t have cookies, but in the farthest corner of the arena, we found some grass, and I pointed it out. 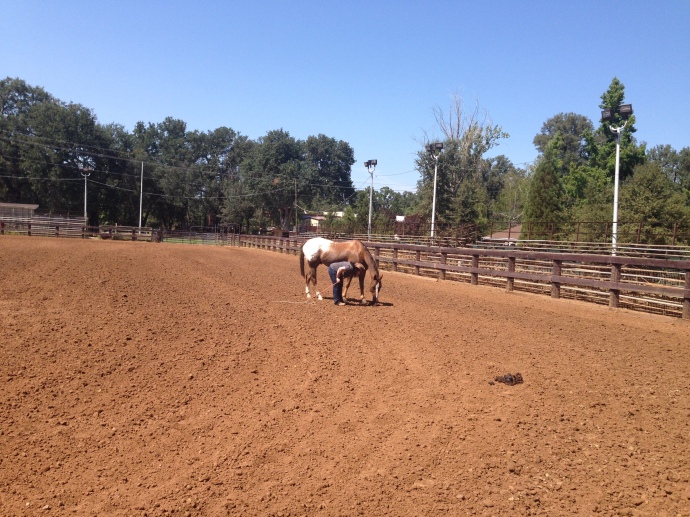 I felt the advances in my horsemanship all throughout, from the on-line portion of looking around the field and walking to the arena through our on-line warm-up, our liberty, and our return to the trailer.

My body language is improved. My gestures are smoother, and I don’t have as much random rope-wiggling. I’m more focused and do not have to work so hard to create a feel of going somewhere. I have better timing in when to allow him to look and when to make the task more important than the environment. My corrections are fairer, my gentle is gentler, and my firm is reliably firm without being harsh.

We had a challenge loading up to go home. What I learned was that he needs my help keeping himself straight and moving forward up the ramp. When he hesitates or thinks too much while on the ramp, he trips or slips, which then increases his hesitation on the next try. I learned to accept that it’s okay to lead him in rather than send him in. It’s okay to ask for help, like to have Seth and Jan fasten the butt bar while I stay up front and hand-feed Rocky.

Never not be afraid!
~ The Croods

I also learned that I have a hard time believing that things will get better. My first reaction is to spiral down into this is too much, it’s unsafe, I must protect Rocky, this is scaring him, we can’t do this again, we just have to get home and that’ll be it.

Where’s that can-do spirit? Where’s the part about principles, purpose, and time are the tools of teaching?

I am now replacing that story with another one. It’s matter of practice, not a matter of trauma. Rocky has not told me that he can’t possibly stand the 2.5 hours by himself in the Brenderup. All he’s told me is that the ramp is hard and that I can help him with it. 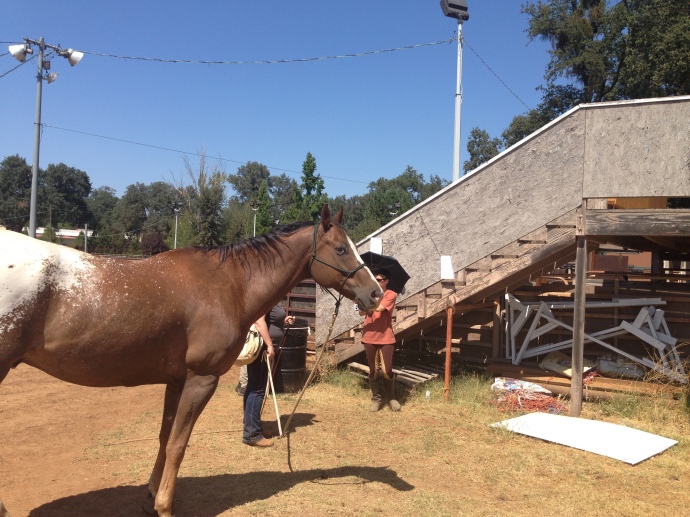 It’s like the flame spurt in the Fire Swamp. Once you know what to expect, you can develop a strategy to overcome it.

Buttercup: We’ll never succeed. We may as well die here.
Westley: No, no. We have already succeeded. I mean, what are the three terrors of the Fire Swamp? One, the flame spurt – no problem. There’s a popping sound preceding each; we can avoid that. Two, the lightning sand, which you were clever enough to discover what that looks like, so in the future we can avoid that too.
Buttercup: Westley, what about the R.O.U.S.’s?
Westley: Rodents Of Unusual Size? I don’t think they exist.
~ The Princess Bride

Imagination is one of the 7 keys to success with horsemanship. I have a powerful imagination which helps me be creative, solve problems, write, and think like a horse.

One thought on “Actually, this kind of is my first rodeo”