Posted on September 24, 2009 by horsegirlonajourney

Today’s post is uuuuuge, so I’m putting a jump link in. Rocky’s update comes first, then Salsa’s. If you don’t have time or interest in reading 1500+ words but do want to know the overview, it comes down to:

“Every time I stray from the Patterns, we regress, so I need to stop having futz days in between and always do one or two Patterns on the ground and in the saddle, period, end of confession.” (It doesn’t mean we will only do Patterns, only that the Patterns will be our foundation on which we’ll build the rest.)

My last morning conference call ended early today (must be the Apocalypse) so I headed outside for a long lunch. Rocky has been cinchy again lately so I spent a lot of time warming us up on-line, playing Squeeze Game near the front arena, experimenting with thresholds, grazing next to the pot-bellied pigs and then driving them off (oh yes, oh yes!), trotting around the arena, and practicing canter transitions.

Then I saddled up and got less resistance than last time but definitely not a welcoming “yeah mom cinch it up let’s go!” Warming up didn’t solve it entirely. I blew his mind by handing him a cookie with the first buckling though and after we had moved around a bit he accepted the second tightening better and the  third tightening with hardly a twitch.

He stopped a lot during our ride and in the arena made some faces that we recently saw at the Parelli Gold Summit in Colorado, on Smart Seven. He didn’t make faces outside the arena though he did stop a few times. However, today he was much more willing, or at least continuously walking, during the Figure 8 pattern around the big oak tree and the yard waste pile.

Rock is feeling much better footwise, although I do think I overdid it a bit today, as he was favoring his left front when we were all done.

Some of my strategies today made it out of my head and into my body.

I was much more relaxed about the threshold of the front arena than I used to be. I didn’t even go up there with the goal of entering the arena — we moseyed that way so I could see where his threshold is. When we found it, I backed us off a few feet, then stood with my back to the arena fence and had him squeeze between me and Leslie’s deck, then turn and face at the arena fence. He had no issues going to my right, away from the arena gate, but stopped midway in the other direction. I let him look, then used Yo-Yo Game to back him away from his line, then sent him back to the first part of squeeze for a turn-and-face.

At one point he actually entered the gate and turned and faced, and I told him “What are you doing in there? We’re not actually going in there today, but thank you!” and brought him out and gave him a long rest and even an offer of grazing that he was still too tense to accept.

I asked for the canter from a walk and from a trot, but either way, I asked for it right when he came level with a barrel. Then about a quarter circle later, when he came level with a cone, I brought him in. If he missed the canter, no big deal. I just let him go around in whatever gait he was in, and asked again at the barrel. Pretty soon (as Linda likes to say!) he knew what to expect, and did not resist cantering — he saw that I was not going to make him go ’round and ’round and ’round on this, our third time deliberately cantering on-line since who knows when. Probably since January, when the foot problems started. The last time around, I had him do two loops, then brought him in. So he cantered at the barrel, trotted at the cone, then canter, then trot, then turn and face and rub.

Levels of a game

It finally sank in that video games have levels for a reason. Each level gets harder so the game stays interesting. That’s why more laps or more feet or more precision or more whatever, after the horse learns what he’s supposed to do. It is not overdoing circles to have rocky do the Parelli-level number of laps with rhythm, relaxation, and contact. And in fact I could use the 45-foot line and eliminate concerns about circles and joint stress altogether. So I have started saying “good boy” when he’s doing the Thing, but not accompanying that with a rest or a cookie. He responds very well to “good boy” and I have seen him relax and put more energy into what he’s doing when I say it, presumably because he knows that he is doing the right thing.

I didn’t do it that well today but it sank in for next time, that it is not only okay, it is right, to make it more challenging by being more particular. Just thinking of it as beating a level in Super Mario Brothers. We’ve been coasting through the easy between-level area of scooping up coins, but now it’s time to get back to saving the princess.

I have realized just how broken our Circling Game is. In part it’s because I could not do higher gaits with him for so long. In part it’s because I learned it clumsily as a newbie and never went back and fixed it (didn’t realize I need to, until lately). I have been wary of the round pen because of his arthritis. Straight lines and wiiiiiide circles are our destiny, according to our vet, and I don’t want to overstress Rock’s joints just because the Adequan has him feeling so much better.

Recently I have begun asking for more laps and reading more accurately when he’s zoned out and when he’s tuned in. I need to get more particular about that, as he has a pattern now of deciding when it’s time to come in. I use that as an opportunity to work on my send, but still, it’s obvious that it’s not about asking a question, it’s about dominance. (He asks questions at other times so I do know the difference.

I was not effective in the saddle today. This happens to me. I get worried about whether he feels sore, lame, bored, or otherwise unhappy with the relationship and whether I am doing the right thing by continuing to attempt our Freestyle patterns. I was wimpy and unconfident with my phases, and either I was nowhere near as focused on a point as I’ve been in the past, or Rock was ignoring my body language altogether. Wiggle wobble zig zag all over the place.

Linda showed us at the Summit how to motivate Smart Seven, a left-brain introvert who doesn’t like arenas. She showed us how to make it a game, not an argument, and one of the things she said was that a fly can get a lot out of a horse. There is no reason to get rough or sharp with the phase 4 — just do some annoying thing like slapping the rope around your shoulders really fast. Then be ready for him to squirt out under you.

It’s that consistency thing again: cheeks, legs, cluck, DRIVE. She said you’ll only have to get to DRIVE a couple of times before the horse decides it’s more fun to keep you still by going at cheeks (or maybe legs). I have this in my mind now, and see where and how I could have done this better, so I shall practice it the next time the situation arises.

I got Salsa around 6:00 pm, just when he was going to the Back 40 for his nightly hay and turnout, and brought him into the arena to do our second session with the Seven Games. He is accepting more commotion with the carrot stick in Friendly Game, even on his right side (though still much more confident on his left). He moved his feet with Porcupine. We didn’t quite get to Driving, as I could tell from his expression and his licking and chewing that he was digesting a lot. I didn’t want to overdo the pressure. 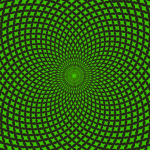 He also pawed a lot, and so we walked a lot. I kept the savvy string over his back and walked with him, and didn’t necessarily remove it when he stopped, though I did release with my energy. He is innately left-brain extrovert and I can see already how savvy you have to be to stay ahead of a horse like this!

The Patterns are going to be a huge help with Salsa. Our next session we will add the Driving Game to our repertoire, and in the one after that, we will start the on-line pattern of Touch-It. With him, I won’t have to do Level 2 at the walk, either, as he does not have the pain issues that Rocky has been going through, and the patterns will give him a constructive outlet for his energy. How cute he will be trotting around the weave pattern!