I must be doing something right

Posted on July 21, 2010 by horsegirlonajourney

We’ve had several breakthroughs in the past month as I have attempted but failed to get back onto some sort of progressive plan — doing the Liberty patterns and watching the rest of the new Level 1/2. We have the Parelli Across America event in California in just two weeks and I am skipping a rather important (but more expensive) trade show to go to it, so I need to get back with the program, literally.

The Clean Trax soak helped Rocky’s thrush issue and he’s been feeling a lot better lately overall. When I turn him out in the arena with Salsa, he will trot across its width when he sees me, and he will stick to me even when I’d rather he wander off. I’ve been at a loss for ideas and need to watch the liberty patterns again. I’m still hesitant to ask him to do much trotting but my instincts are telling me that at this point, I need to move forward with a gradual conditioning program or he will never re-balance.

The daily half cup of corn oil has improved Salsa’s skin and coat so that he is no longer crazy with itching. He even looks shinier in the sun.

We took Salsa on the family walk around the neighborhood, a one-mile loop on a wide street, and he didn’t show any signs of worry about wearing his saddle the whole time. Jan has taught him to lift his feet when we snap our fingers twice, and we have been cleaning his hooves regularly and grooming him too, like a real cared-for horse. I have stopped teaching him anything new, as Jan is able to visit enough this summer to keep his education going. I just reinforce during those weeks that she is not here. 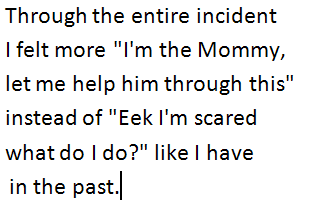 Tonight I rode Rocky in our Western saddle for the first time in ages. My plan was to ride around the ranch in the used Easy Boots Gloves we just got, but by the time he was brushed and booted and saddled, it was too dark. Eventually we will be able to ride here at night but since he is moon-blind, I have to wait until our relationship progresses and my riding skills improve so much that he completely trusts my directions. And then I have to make sure not to run us into anything!

I did mount at a spot just outside the arena with the plan of riding him one circuit around outside the rail before going in. That way we could take advantage of the arena lights but still be “on the trail.” He went along fine for about 10 strides and then panicked at the covered pony cart parked near the barn. His head went up, his haunches went down, and he started backing up fast. I didn’t even think about bailing off! I kept him backing and when he tried to swing his head around and turn, I kept zone 1 firmly pointed at the spooky object. That took some strength on my part but he did follow the feel and we kept backing, and then I allowed him to rest. At that point I thought “I wonder if I should get off? What if he doesn’t plan to rest must longer but instead wheel around and bolt and NOT follow my feel?” It took me a few seconds to decide that having had the thought, I should dismount, even though I had answered myself with “Nyah it’ll be okay.”

When I thought back on the incident I realized that I did everything right. Possibly for the first time. I pushed myself deeper into the saddle with one hand on the pommel. I did not hold my breath or tighten my legs. I kept him facing the scary object and channeled his need to move into moving backward, rather than trying to stop him or push him forward. I remembered the Parelli instruction to dismount the moment the idea pops into your head, and then I was totally confident on the ground, which gave Rocky more confidence. We then practiced facing the object, walking toward it, waiting at thresholds so he didn’t feel shoved over the cliff, me petting the object all over and then petting him, and finally him putting his nose on it.

Then we walked off and did something else.

Through the entire incident I felt more “I’m the Mommy, let me help him through this” instead of “Eek I’m scared what do I do?” like I have in the past.

I got back on in the arena and practiced some point to point, choosing just two points to walk between, and trying very hard to let my focus and my body do all the guiding and not pick up the reins unless absolutely necessary. Both Rocky and I managed to be straighter this time in both our walking and our resting, so then we rewarded ourselves (heh) with a nice easy follow-the-rail for a few circuits.

When I felt like we’d both learned something and were still having fun, I hopped off and unsaddled him, then took off his halter, and we did some cool-down laps at liberty. He stuck to me and occasionally tried to drive but I caught it and didn’t let him, just changed direction or gait or speed and gave him something else to think about. None of the obstacles were out so I just made up shapes as we went, triangles and circles and squares, and we ended at the cookie station. I then took him back to his pen at liberty with not even one attempt to get away on his part.

I must be doing something right. My horse wants to be with me, is confident and even pushy about doing stuff together, and is much more responsive to my leadership when he’s afraid than he used to be.

3 thoughts on “I must be doing something right”