Posted on February 11, 2011 by horsegirlonajourney

On Tuesday, I took Salsa out for an hour before hitting the road for a business trip. I applied the lessons I have learned recently from Pat’s segment on “the power of infinity” (Savvy Club DVD January 2011) and from playing with River, who did not already know to maintain gait and direction at canter.

I started with a walking figure 8 and had him go until he changed direction with just me switching my rope hand, without supporting with the carrot stick. Then we took a break on the pedestal as a reward, followed by some sideways at the fence — we are up to the goal of five strides before resting, and achieved it.

Back to the figure 8 for trotting the pattern. He did his usual trick of bracing against the halter, swinging his body to the outside so he’s trotting a little sideways and leaning on me like a Labrador on a leash between the truck and the lake. He also broke gait at the point of the circle opposite of me. 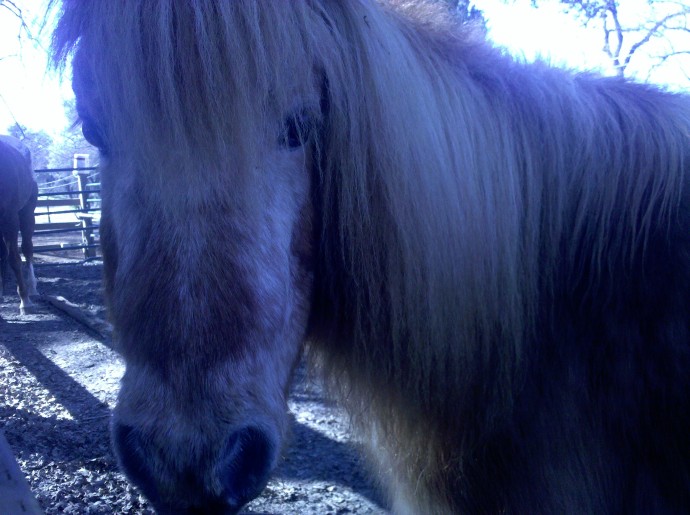 I remember Pat saying to start with games 1 through 3, then the level 1 on-line patterns, then back to games 4 through 7. (See Parelli Reference.) The figure 8 pattern helped me see what I could do with circle game to help me communicate more clearly and Salsa enjoy the game more. I took us to another part of the arena and asked for one good lap at the trot, not breaking gait, and I was not persnickety about whether he had his head up or not because it’s the first time I have persisted this long. And lo! He began to check in, and he began to trot more of the circle before breaking gait, and once he started checking in, he didn’t have his nose to the outside anymore. Eventually.

When he got his one lap we took a rest and a stroll, with the stick and string in a rhythmic motion (not pressure) around him. For our final lesson, I put a pole out and asked for circle the other direction. Even though it was just a cavaletti pole on the sand, no risers, he chose to jump it like he was playing steeplechase pony. He did a complete trot lap a lot sooner in this direction than he had to the left, and that ended the school day. We moseyed out for a grazing snack and then hung out watching Erin developing a pair of Peruvian Pasos and eventually meandered down to the pen he shares with Rocky during the day.

I keep saying things like “persist” and “eventually” as if it was so much trouble to take the time that it takes. But the entire session lasted about an hour, and did not include treats, just scratches and rests and brief-but-interesting interludes of doing things he’s already confident in.

I bet $1 that next time I take him out for trotting figure 8s and circles, he gets it in half the time. Genius.