Salsa performed his responsibilities right away

Posted on February 12, 2011 by horsegirlonajourney

I took Salsa out for his second session of figure 8 pattern and circle game and wow did he impress us all.

The very first time I asked for a full lap of trotting circle, he gave it, jumping the pole with enthusiasm. He didn’t break gait, didn’t change directions, and looked where he was going. He also more relaxed in his halter and more aware about how my staring at his hiney means he can disengage and come in. When I asked for two laps, we went through a few one-and-somes but got to two full laps much sooner than it took us to get the one lap on the first day.

On the figure 8, when he broke gait, it only took a cluck-cluck to remind him to trot, no carrot stick necessary. He braces more on the figure 8 pattern than the circle but several times crossed through the middle with only my changing which hand held the rope and guiding zone 1 a little — no need for stick to back it up. 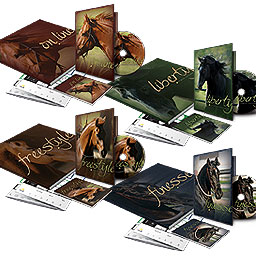 I added variety with some obstacles he already likes and is confident about, like all four feet on the pedestal, although backing until just his hind feet were on the ground was a challenge for him. I also set up a squeeze with upright barrels — taller than he is — and his challenge there was just the turn and face and wait. He wanted to turn and face and come stand by me. This was wonderful, as when we first rescued him he didn’t want to be near us at all.

I ended with the figure 8s and missed two opportunities where I could have released but didn’t catch the subtlety in time. The third time — a complete figure 8 offered, with only one little place of broken gait but it was while he asked a question — I brought him in and scratched him for a long time. Then I removed his halter in case he wanted a recess to gallop around or roll. Instead, he stayed with me, licking and chewing, relaxed, soft eyes, little ears pointed forward or slightly to the side at me.

The difference is as much in me as it is in him. That is, the progress I have made has opened the door for him to understand and enjoy the games and patterns. I’m more clear in my signals (believe it or not!), and more importantly, I’m more confident in what I’m asking for and whether he is into it. I stay with a request longer rather than panic that I’m insulting or hurting the horse and stopping lest I ruin the relationship. I know what it’s supposed to look like now, and can persist, and adapt, and experiment, and make mistakes, until I get there.

Do your thinking at night and your feeling during the day. ~ Pat Parelli

One thought on “Salsa performed his responsibilities right away”