No river can return to its source, yet all rivers must have a beginning ~ Native American saying, tribe unknown

Posted on March 14, 2011 by horsegirlonajourney

The day before River’s quarantine was to end and she could join the other horses in the biggest pen, she developed an abscess on her right front and popped a splint on her left. This means that when she has to lift her right foot for bandaging each day, she has to put her weight on a sore left leg. And when normally she’d be able to keep her right foot up a bit so the abscess can drain, she’s keeping most of her weight on the right to relieve the left.

We discovered this on Thursday, when our farrier arrived on his regularly scheduled day at the ranch. I kept myself together in the barn, but when I returned to my office, I was swept into a maelstrom of of anger, blame, despair, and fear.

Anger, directed at myself: Why didn’t I have our trimmer come right away when we saw how long she was, after the Atwood farrier changed his appointment and she ended up coming here without her scheduled trim? Did her overdueness for a trim cause the stress on that splint bone?

Anger, directed at the weather (warm + wet = hungry, horse-eating spores) and at the region: It seems like this area gets a more than its share of abscesses. But I’m comparing it to the desert where I had Rocky — and I wouldn’t really prefer a higher rate of enteroliths and sand colic instead.

Despair, that I must be incompetent, to bring home a perfectly healthy, sound horse and have her double-lame within a fortnight. (Rocky was “serviceably sound” when I got him, too.) Frustration that just when she’d have been allowed to run and play and be all over the ranch with all its interesting obstacles and toys, she has to be confined to a 20 x 12 area until who-knows-when.

Through it all was a strong current of fear for her. This eased as I got more data about splints, and learned that her particular case is relatively mild and won’t affect her later in life if we dedicate to her care these first few weeks (duh!).

But after researching and talking to the vet, Erin, other horse people, and friends, I concluded that it’s better to go through this now, rather than send her out to a taste of freedom and then have to bring her back on stall rest. And frankly, there’s no blame or should’ve or could’ve. It’s just something that happened, and it can be dealt with.

“The degree of one’s emotions varies inversely with one’s knowledge of the facts.” ~ Bertrand Russell

She’s not quarantined anymore so she can have Rocky for company, not just Salsa; the boys take turns playing biteyface and scratch-me-scratch-you with her through the pipe panels.

There is a LOT of stimulation here, and River has a view of most of the ranch activity from her stall and backyard. Mini-donkeys, miniature pot-bellied pigs, dogs of all sizes, Erin playing with the horses here for colt-start and development, Erin’s students taking lessons, tractors and pick-up trucks taking the manure away to an organic farm, Leslie mixing up supplement buckets, the barn radio — and that’s all just in the morning!

I’ve been experimenting with when and how to doctor my brave and tolerant filly. I’ve found that it’s best to ice and rewrap the left leg first, so it feels its best when I need her to lift her right foot for care. She likes soaking her right foot in a shallow, wide feed tub full of warm water and Epsom salts, while licking a warm mash (oat pellets spiked with a small handful of Senior) out of a tiny rubber feed tub, and then playing with the tiny tub.

I am always ready to learn, although I do not always like being taught.  ~Winston Churchill

It’s best to have a helper although I have done the whole routine alone, too. A helper is wonderful for distracting her — she loves having the inside of her ears scratched, and it’s impossible to bandage a hoof and slip it into a medicine boot while keeping one hand in her ear. She loves anything to do with her lips and mouth, like the treats in the small tub, or playing with a cone or a brush. 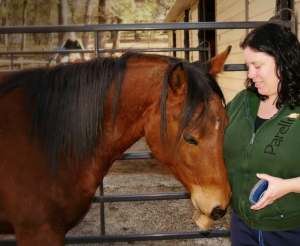 It’s also good to wait for the evening feed to do this all, and preferably after dark. This gives the half gram of bute time to get into her system, and it gets her at a time she’s relaxed and a little bored. Salsa is usually still in his stall munching hay rather than standing outside her fence playing with her, and she’s usually dividing her time between the manger inside her stall and the water trough in her backyard. I put on some music and brush her, then go do things with Salsa, then come back and remove the wrap, then go play with the dog, then come back and scratch her, and eventually over the course of an hour she’s had a lot of positive interaction interspersed with ice pack, wrapping, soaking, bandaging, booting. (And I just this second remembered that I have a Photonic Health red light, which I shall put into my barn coat pocket right now for tonight’s treatment.)

The time between soaking and wrapping the abscess is the hard part, because the foot is clean and I don’t want her to put it down before I wrap it. However, she shouldn’t have to stand very long on that other leg, so tonight I’m going to try bringing her into the barn aisle after I scrub the mat (which will be almost spotless anyway, thanks to Leslie’s diligence about the final sweep out each night). It might be too exciting for her to be out there, but we’ll see, and if it is, we’ll just hang out a bit and then go back into the stall.

I’m still clumsy about it and trying so hard to have everything within reach and organized, but of course she is young and in pain and hopping around the stall trying to get that right foot down, and I don’t blame her. I have been expressing myself verbally (*ahem*) but not tightening up my abs and getting all tense, and while I get too intense in my focus to have conversation with other humans while I’m doing this, I am doing my best to create an atmosphere of concentration-focus not predator-focus, and to do for her rather than to her.

I don’t know how successful I’ve been — but I am trying hard, and learning, and exhausted when it’s all over. I don’t think River is holding a grudge, as at the end, she will press her head into my belly and let me drape my arm over her neck so I can scratch her on both sides at the same time.

River has an indestructible spirit.

3 thoughts on “No river can return to its source, yet all rivers must have a beginning ~ Native American saying, tribe unknown”